This month Dr Ben Fletcher-Watson, a researcher in theatre for Early Years at the University of Edinburgh, shares his thoughts on theatre apps, mobile technology and online content to extend and enhance the theatre experience for wee ones.

What is technology? We usually think of technology as meaning computers, smartphones, tablets, and all the digital devices that pop up throughout our daily lives. But there is another way of thinking about technology – as what Ursula Le Guin calls “the active human interface with the material world.”

Le Guin has pointed out that hi-tech and low-tech are misused terms:

One way to illustrate that most technologies are, in fact, pretty “hi-tech,” is to ask yourself of any manmade object, Do I know how to make one?

…I don’t know how to build and power a refrigerator, or program a computer, but I don’t know how to make a fishhook or a pair of shoes, either. I could learn. We all can learn. That’s the neat thing about technologies. They’re what we can learn to do.

It’s interesting to think about technology in this way. If I want to do some finger painting with my children, could I make paint from scratch? How would I go about making paper?

But obviously technology does include digital devices, and so I’d like to look at a few ways in which it can help extend a visit to the theatre and enhance the experience.

You’ve probably seen scare stories in the media about screen-time, iPad addiction and smartphone zombies. It’s worth noting that very few of these stories have a grounding in research, and even the American Academy of Pediatrics – responsible for the well-known ‘no screens before 2 years old’ claim – has recently acknowledged that “screen-time” is an antiquated concept. In 2015, the AAP’s media committee said, “in a world where ‘screen-time’ is becoming simply ‘time,’ our policies must evolve or become obsolete.” Just look at the way in which Pokémon GO was reported this summer: the newspapers revelled in stories about teenagers getting lost in a cave, but often overlooked the many positives – players getting active, exploring their local environment and meeting new people (particularly for children who struggle with socialisation).

As my wife, Dr Sue Fletcher-Watson, says in a recent blog on children and technology, the word screen-time “lumps together a series of discrete activities which are not in any meaningful way the same. Imagine if we added up ‘papertime’ including reading novels and newspapers, completing worksheets in school, doing crossword puzzles and colouring in.”

Computers offer many possibilities for play, learning and socialisation – always with the caveat that exploring the digital world together is the best way to stay safe and stay involved. Here are some examples of fun activities that mix live theatre and digital arts for the very young.

For their 2012 show, In A Pickle, produced with the Royal Shakespeare Company, Oily Cart created an activity sheet for parents to download before the performance.

The sheet gave ideas for songs, games and activities connected to the show (an adaptation of Shakespeare’s The Winter’s Tale for children aged 2 to 4). It also contained a short section for prompting discussions afterwards: what did you like best? Who was your favourite character? Which place did you like the most?

This was explicitly designed to prepare children for the performance beforehand, and so, since Oily Cart couldn’t contact everybody in advance, the best way to deliver it was online. Their website also has a video and music from the show to prepare your child, or to enjoy afterwards:

It’s worth remembering that for very young children, knowing what to expect when they go into the theatre is much more important than preserving the surprise. If there are pictures, trailers, soundtracks or plot descriptions which you can access online before your visit, these will help your child feel comfortable and familiar with the strange, dark, mysterious, exciting room where the show happens. Spotting a character or hearing a tune that they recognise is just as thrilling as something totally unexpected!

As adults, we expect to be told to sit down, stay quiet and switch off our phones when we go to the theatre. But increasingly, artists are blending live and digital work in fascinating ways.

Roma Patel is a theatre designer and academic who builds what she calls “scenographic environments” filled with digital and wearable technology, like tiny knitted creatures whose eyes light up when you tilt them from side to side. There’s no plot to follow in these kinds of works, just the meanings made by children as they move around the space and interact with objects. Like the Starcatchers piece Multicoloured Blocks from Space, Roma’s environments are built for play and exploration.

In Australia, Imaginary Theatre are developing a new piece for 2 years and up, called Circle. The show lets children play with the Entity, a glowing ball packed with smart technologies, which responds to and affects an immersive environment of lights and sound, called the Habitat.

Imaginary Theatre’s Thom Browning says: “The majority of technology for children is currently screen-based, offering mostly passive interactions that don’t facilitate the active play that’s crucial to children’s physical, neurological and social development. One of the things we loved about Circle is that it seeks to solve this problem, creating technological platforms for children that nurture their in-built capacity for physically active, kinaesthetic, and creative play.”

So get ready to play when you visit the theatre – sometimes you can dance with your shadow in front of a projected picture, or make sounds by walking on a sonic mat. Technology doesn’t have to mean screens.

Catherine Wheels’ worldwide hit, White, offers a fun example of digital play with White: The App. The company turned the props and set into a ‘digital toy’ that lets children recreate scenes from the show so they can become Cotton and Wrinkle, catching eggs, caring for them, putting them to bed and throwing a party. I worked on this project with app developer Hippotrix, and my research into children’s theatre apps can be found here. 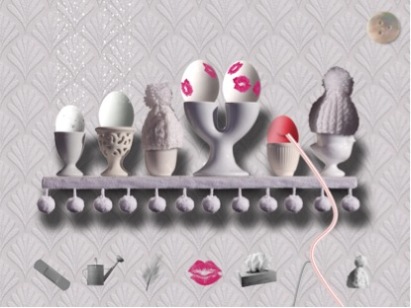 White The App, like other theatre-inspired apps like Dance About and Secret Suitcases, gives children control of the narrative to replay and explore their favourite moments, aiding understanding through play. These products also allow children who may never even see the show to engage with its ideas, images and sounds, wherever they live in the world.

Children want to unpick theatre experiences, but they can’t simply watch the show again, as they do with television. Parents and carers can help them comprehend complex events like live drama, and I think that companies have a responsibility to start the ball rolling.

We’d love to hear about your arts experiences online – share your finds and ideas in the comments below!

Biography: Dr Ben Fletcher-Watson is a Postdoctoral Fellow in the Institute for Advanced Studies in the Humanities at the University of Edinburgh. His research interests include theatre for early years, relaxed performance and mobile / wearable technologies in theatre.